Bryce Canyon National Park is named for one of a series of horseshoe-shaped amphitheaters carved from the eastern edge of the Paunsaugunt Plateau in southern Utah. Erosion has shaped colorful Claron limestones, sandstones and mudstones into thousands of spires, fins, pinnacles and mazes. Collectively called "hoodoos," these unique formations are whimsically arranged and tinted with colors too numerous and subtle to name. Ponderosa pines, high elevation meadows and

fir-spruce forests border the rim of the plateau, while panoramic views of three
states spread beyond the park's boundaries. This area boasts some of the
nation's best air quality. This, coupled with the lack of nearby large light
sources, creates unparalleled opportunities for star gazing.

Bryce Canyon National Park is named for pioneer Ebenzener Bryce who came to the Paria Valley with his family in 1875. He was sent by the Church of Jesus Christ of Latter-Day Saints because his skill as a carpenter would beuseful in settling this area. Bryce built a road to the plateau top to retrieve firewood and timber. He also built an irrigation canal to raise crops and animals. Local people called the canyon with the strange rock fomations near Ebenezer's home "Bryce's Canyon". The Bryces moved to Arizona in 1880, the name remained.

As southern Utah developed, Reuben and Minnie Syrett--who homesteaded just outside the present park boundaries--brought their friends to see the intricately eroded stone formations. By popular demand, they developed sleeping and eating facilities on the canyon rim. They called their establishment, "Tourist's Rest." When the area was set aside as a national monument in 1923, the Union Pacific Railroad bought out the Syrett's interests and began to construct Bryce Canyon Lodge intending to make the Bryce Canyon area part of their new "Loop Tour" of the southwest. The Syrett's then built "Ruby's Inn" on their own land just north of the park.

The current lodge inside Bryce Canyon National Park is the same one built by the Union Pacific railroad in 1925. (Obviously the lodge has been renovated and upgraded as needed over the past 75 years. About 3 nights per week, the NPS offers an evening ranger program in the auditorium (Much more pleasant than sitting out in the chilly campground ampitheater)

Bryce Canyon is one of the most beautiful National Parks in the United States, with almost mystical hoodoos towering above visitors... and endless possibilities to explore small canyons.

Located in South-Central Utah, the Bryce Canyon area is a fairly long drive from any major City. The closest major city is Salt Lake City, Utah, but most travelers end up flying into Denver, Salt Lake City, Las Vegas or Phoenix.

PLANE - For those that want to fly into Bryce Canyon, the major points of entry are Salt Lake City and Las Vegas. Phoenix is another option, but it is roughly a 7 hour drive from Phoenix. Many people will tie a trip into another National Park (or multiple parks) on the way to Bryce Canyon. You can also find regional flights to Cedar City, Utah and St George, Utah as closer option.

CAR -As you can see from the map above, the park is "fairly close" to I-15, with a fairly scenic drive up and over the mountains from I-15. You can expect to drive from Cedar City, Utah to Bryce Canyon in about 90 minutes, depenidng on traffic. Route 191, which goes up near Bryce Canyon, is a beautiful road and shouldnt be missed.

Weather & Climate at Bryce Canyon National Park
Weather varies greatly throughout the year. Temperatures can be below zero during the Winter, and above 80 degrees in the summer. Most summer days are in the 70s to 80s with thundrestorms in the afternoons. Snow can be heavy in some years.

Accessibility
Visitor Center is handicap accessible, as well as many of the rim trails that are paved.


Where to Stay at Bryce Canyon National Park

Camping at Bryce Canyon National Park is a great way to experience the wilderness of the park, as well as do it cheaply! I have stayed at both campgrounds during the summer and have actually camped in the dead of winter at the North Campground. From experience, the weather can vary quite dramatically, with hot sunny days and large thunderstorms in the afternoons. I enjoy the Sunset campground more than the North Campground, especially for Tent camping. As for Winter camping, please keep in mind the weather can be VERY COLD during the winter and plan accordingly. I camped 3 nights in Winter of 1999 and I was the only person in the campground for 2 of the 3 nights, and the Rangers thought it was quite strange to see someone tent camping. One of the nights got down to -10 F, and was the coldest I have been in my entire life.

Click here for a downloadable PDF map of the campgrounds.

North Campground
Open Year Round
103 sites at $15 per night. 32 sites are available for reservation during busy times of the year. Flush toilets and water are available year round.

Sunset Campground
Closed in Winter
96 sites at $15 per night. No reservations accepted. Flush toilets and water are available. 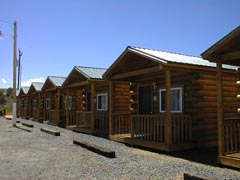 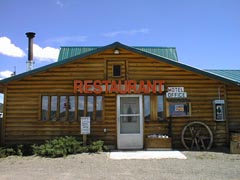 Location: Located just a short 15 miles from Bryce Canyon National Park on Highway 12 (just off Hwy 89), this Inn is perfectly located for those that are looking to visit Bryce Canyon, or use as a base to do day trips and visit other parks like Zion National Park as well.
Facilities: They have 20 log cabins and 32 Inn rooms that are clean and cute. They also have a Restaurant on premisis. Hiking trails are located nearby.
Contact: Website - http://www.haroldsplace.net or Email - Harold's Place

A new Visitor Center is now open, offering better exhibits and information for your stay at Bryce Canyon. Scenic driving along the rim to Sunset, Sunrise, Inspiration and Bryce Viewpoints are the most common activity in the park.

Hiking at Bryce Canyon National Park
There are numerous hiking trails in the park, including a paved trail on the rim of the canyon. The trail into the canyon from the parking area can be strenous, especially in hot weather. Bring adequate water for everyone and allow extra time for breaks along the trek back up.

Hiking Safety Tips from USParkInfo:
1. Carry plenty of water, at least 1 quarter per person for every 2 hours on the trail (ie, 2 people for a 4 hour hike should have 1 gallon)
2. Stay on maintained trails. Do not "trailblaze" through the park, as this will cause damage to the local vegation and is dangerous
3. Do not feed the animals. Even if the squirrel looks really cute and wants your lunch, do not give it to them. Animals can and do bite!
4. Take breaks often. For those that are not used to hiking, this can lead to exhaustion and can be dangerous if you push it too hard.
5. Be courteous to other people and animals. If you come accross people on horseback, please move as far off the trail to let them pass
6. Do not bring your pet with you on the hike. It is against Park Regulations to have pets on any trails
7. Wear proper clothing and shoes. Hiking boots are the best option, but atleast sturdy athletic shoes and wear layers for changing conditions.

A Few Hikes to do in Bryce Canyon
Rim Trail - Easy
This trail is, as it implies, around the rim of the Bryce Canyon ampitheatre. This can be as long or as short of a hike as you want, anywhere from 100 yards to 11 miles. Take advantage of the hike to get different perspectives of Bryce Canyon.

Queen's Garden - Easy to Moderate
This is the "easiest" of the trails into the canyon. It is roughly 1 3/4 miles in length and will take 2-3 hours to complete.

Nearby Cities and Other Stuff to Do

The Southern Utah area around Bryce Canyon is one of the most picturesque areas in the country, with great little towns, history of pioneer families setttling the area, and beautiful National Parks and Monuments.

Kanab
For those that are coming from the South, Kanab is the last "major" town before getting to Bryce Canyon. It is just a short 90-minute drive from Kanab up US Hwy 89 to Bryce Canyon. Here in Kanab, you will find all the luxuries that you will not find in Bryce Canyon, such as Grocery Stores and Fast Food. The downtown area of Kanab is fairly cute, and it the town is a nice place to stop for a day before or after your trip to Bryce Canyon National Park.

Cedar City
Known as the "Festival City", Cedar City is a town built up along the I-15 corridor, but it does contain some quaintness not associated with many towns found along Interstates. Cedar City is a "Major City" for this area of Utah, offering all of the modern conveniences that you find in your hometown, including the wholly grail, a Super Walmart. This comes in quite handy for those that are looking to stock up for a week or camping in Bryce Canyon, Zion, or Cedar Breaks, and do not want to break the bank at a smaller store.

Cedar City also has a plethora of options for lodging, restaurants and shopping. For those of you that are trying to find the closest airport to Bryce Canyon, Zion and Cedar Breaks, you will find it here in Cedar City. The Cedar City Regional Airport is one of the most picturesque small airports that you will find anywhere in the country. The new passenger Terminal was built in 2004 and is modelled after many of the historic National Park lodges. The Terminal has a 3 story tall main atrium with Floor to Ceiling windows and a beautiful fireplace. The only scheduled service to the airport is by Delta Connection carrier SkyWest Airlines, and offers daily service to the Salt Lake City International Airport. 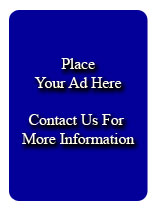 Search For National Parks and Monuments by Map

Search for National Parks and Monuments by State Listing

Basic Information
Where to Stay
Activities
Nearby Cities